We compare points, games, sets and other statistics from 1968 to today in order to answer how tennis has evolved.

One of the first things to consider when assessing the competitiveness of any sport is how many points are scored by opposing players and teams. In basketball, for example, a score line of 101-99 is way more competitive than 130-70, even though the total points scored is the same. In tennis, results are dictated by a scoring hierarchy (point-game-set-match), therefore, there are many ways to judge the competiveness of a match. Tracking each of these scoring numbers over the years reveals just how much the competition has evolved – or stayed the same… 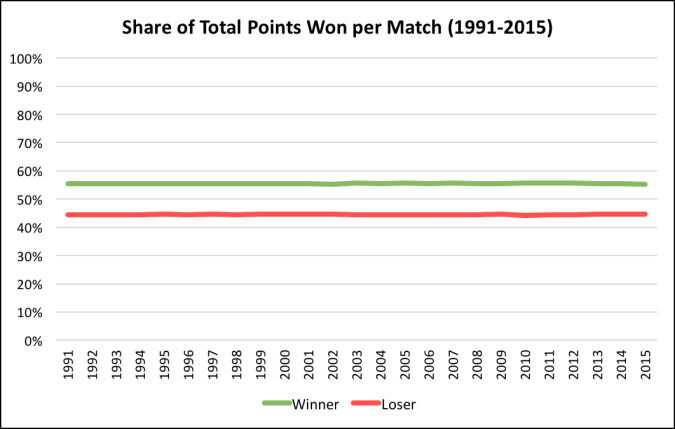 We first started at the micro level to examine trends in points won and lost. Looking at the average percentage points won/lost, we found that there has been no major change throughout this time period. This seems puzzling, as one might imagine players getting exceedingly dominant in matches, or reaching a ceiling, and others catching up at a faster rate. One explanation for the flatness in points won and lost could be that, in order to win, you may just need to win one major point, either to break, consolidate a break, finish a set, a match, or even just change the momentum.

We also looked at the distribution of the share of points won by the winner over this time period. The loser’s distribution will mirror around the 50% mark. Most winners obtain around 50-60% of the points in any given match. Some outliers indicate matches where a player who was losing in the points won category won because his opponent retired. It’s interesting to note that most matches are not won in major landslides in the points category, as is often indicated by the game and set score line. So, even though a player may lose 6-0, they could have in theory won right around 49% of the points.

While the points won margin has not changed, when looking at game differentials per set, we see a clear pattern that the winning game margin is narrowing. In 1968, the winning game margin averaged over 3 games per set, suggesting a typical score line of 6-3. In the modern game, that margin has narrowed over half a game per set, indicating a typical score line closer to 6-4. This means that although players don’t necessarily win a greater share of points, we are witnessing closer score lines than ever. This supports an increasingly competitive sport. 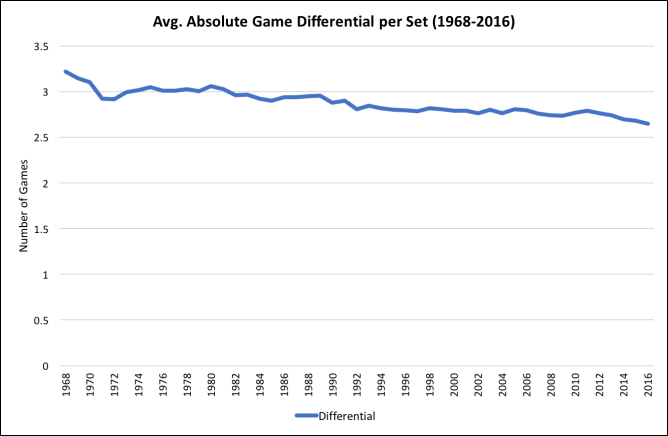 By Sets and Tiebreaks

A powerful metric that sheds light on match competitiveness is the number of sets played vs. the number of tiebreakers played. As we see in the graph, the number of sets played is consistent from 1968 to today. However, the number of tiebreakers played has increased dramatically. The tiebreak was first introduced in 1970 to curb long matches and bring about an end to the set. The years 1968 – 1969 are represented as 0’s on the graph as there were no sets that resulted in a tiebreak. Since 1970, the steady increase can be attributed to more competitive matches as well as a heavier reliance on the serve. The server has an advantage in men’s tennis as he controls the first shot of each point. When both players are great servers, and neither can break, you will expect the match to go into a tiebreaker. 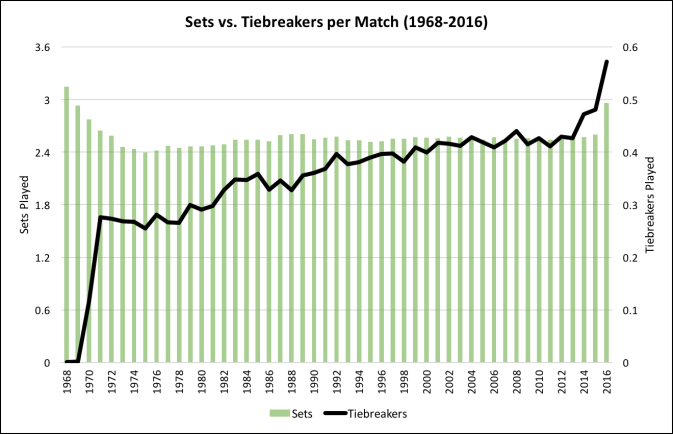 We wanted to examine the competitiveness of tennis further by looking at match level and season level statistics. The data indicates that, although the number of matches per season has gone down from 1991, the duration of matches has increased. We see a spike in 1991-1992, but it should be noted that those are the first years that match duration was recorded. These results may be due to the tennis governing body (ATP) instituting a lower number of matches per season because of the strain of longer matches. Or, longer matches may be the result of the competitiveness of the sport evolving. Since there are less matches to compete in, players are fighting harder and longer to win. 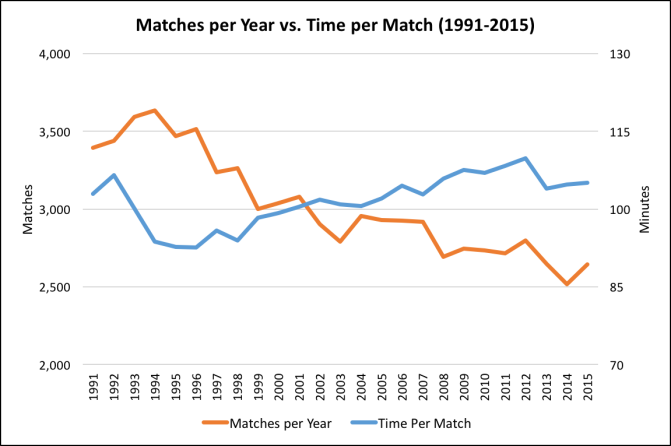 Our data also indicate that retirements have gone up threefold since 1968, possibly indicating that players are pushing their bodies to their limits. This has certainly lead to some amazing feats of athleticism, but it has also led to many players being sidelined due to injury: Juan Martin Del Potro, Tipsarevic, and Nadal being the most notable examples. All three players are absolute fighters out on the court, and leave nothing behind. 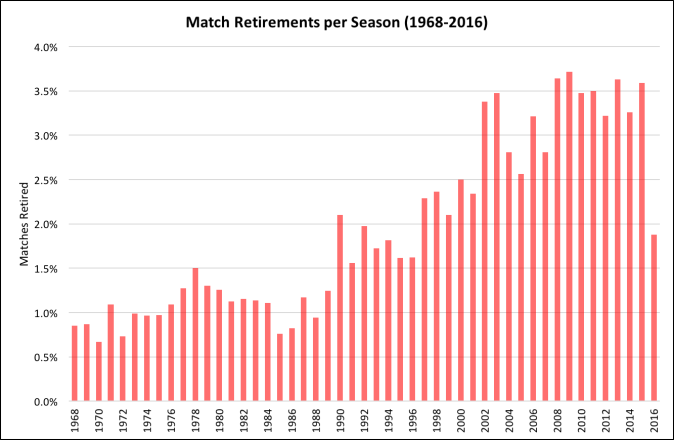 When looking at point level stats, we would not think that the sport of tennis has changed much in the past 50 years. However, when examining the trends in games, sets, tiebreaks, matches, duration, and retirements, the men’s tennis game is certainly evolving into a much more competitive sport. Let’s hope that this translates into even more spectacular match play for fans to enjoy.

4 thoughts on “How competitive is men’s tennis?”