In the meantime, check out these two interactive dashboards below:

For example, Phil Dalhausser has had many partners over the years, and although he has been wildly successful with Nick Lucena, the pair are not as dominant as Dalhausser was with either Todd Rogers or Sean Rosenthal (as judged by % matches won).

From Nick Lucena’s side, he was not winning as many matches before partnering up with Phil Dalhausser (again). His winning percentage increased dramatically in 2015 – 2017. 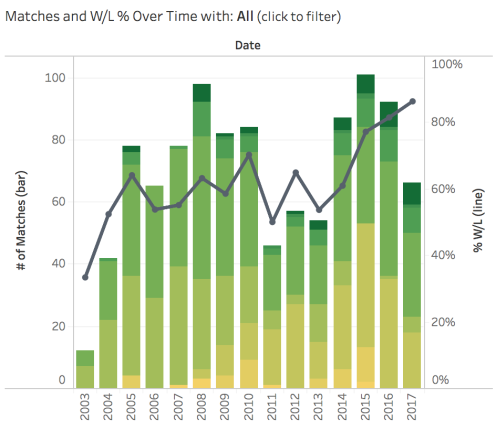 HitPct, or hitting percentage, represents the number of kills (i.e. winners for you tennis fans) minus the errors you make, divided by the total attempts per match (hence, this number can be negative if you make more errors than winners).

In general, as your HitPct increases, the likelihood of winning a match also increases. What’s interesting is that the odds change at different thresholds for different players. Nick Lucena (chart below) starts to tip the odds in his favor (blue shading indicates chance of winning > 50%) when he gets just above ~30% HitPct. Below ~30% HitPct, Lucena is losing more matches than winning (red shading). 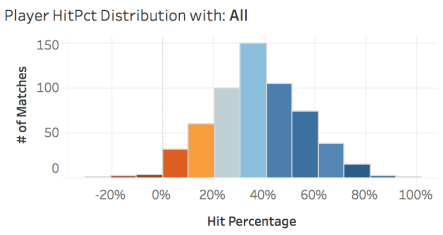 Click the image below for the full interactive dashboard:

This Team Statistics Dashboard gives a high level overview of the teams in the database. You can sort by the number of matches played or the % matches won and filter on nationality, professional circuit, date, gender, and bracket.

Click the image below for the full interactive dashboard:

Any feedback, future topic or collaboration ideas are welcomed. Stay tuned for more!