With the AVP Hawaii Open starting September 20th, I used my match database to examine recent player stat trends. The analysis covers all players currently scheduled to play in the tournament.

What’s the purpose of this visualization?

The intent is that players, coaches, fans, and commentators can see how different players have progressed over the last 2 years leading up to the Hawaii Open.

Players and coaches can specifically make adjustments to focus on key underperforming areas. They can also study their opponent’s strengths and weaknesses to make adjustments.

What stats are available and what do they mean?

The stats are comprised of tournament averages. For example, if Phil Dalhausser played 3 main draw matches in Chicago, his stats would be averaged together in the chart for that tournament.

What does the blue line signify?

The blue line signifies a smoothed trend-line of the referenced stat. It is an average of all non-qualifier matches that occurred during a tournament (it can be a decimal, like an average of 1.5 blocks per match).

What does the x-axis signify?

It references the beach volleyball tournament from oldest to newest.

What does the grey region around the line signify?

This signifies the confidence interval. The wider the grey zone, the higher the uncertainty around the data, i.e. there are less data points that make up the average, hence more uncertainty in the estimate.

(Other players available in table below)

This report shows Reid Priddy’s AVP performance over the past 2 years. His hitting percentage has been steadily improving, culminating in a Manhattan Beach win with Trevor Crabb. His kills have increased while his errors have steadily decreased. He’s also steadily improved his aces, while only barely making more service errors, which is a worthwhile tradeoff. His blocks have slightly increased, while digs have zig-zagged a little bit. This is probably due to him split blocking with different partners, rather than being a full time defender.

Looking at hitting percentage alone doesn’t tell the whole story. The stat is made up of kills, errors, and total attacks. It’s even more helpful to know what’s driving the change in the underlying value. For Reid Priddy, his kills and attacks are following the same trend, while his errors are steadily declining. This is no doubt driven by his transition to beach volleyball in 2017. Look for him to continue improving as he takes on Hawaii with long time legend Ricardo Santos.

Billy Allen has recently faltered on his hitting effectiveness, mostly driven by making more errors over the past two seasons. He’s getting served more as evidenced by the increased number of attacks he has been making this season. He also had less digs in the recent Hermosa Beach and Chicago tournaments. On the serving side, he’s getting close to 0 aces per match while making about 2 serving errors per match. One change might be to be more aggressive on the serve or to get it in 100% of the time since it’s not effectively winning points. A key for him will be to reverse the defensive trend by making big defensive plays that pump up his partner Stafford Slick. Riley McKibbin continues to get served most often between him and Maddison McKibbon. He’s improving the number of kills, and while the hit percentage is relatively flat, it’s showing a slight improvement in 2019. His errors have crept up beginning in Huntington Beach, but they have been slowly improving throughout the 2019 season. He’s recently been more aggressive on his serve, evidenced by the MCKB volleyball Youtube match replays, and it’s shown in 2019, getting to almost 2 aces per match. Serving errors have crept slightly, but under control at around 2 serving errors per match. Look for him to stay super aggressive and running the 2 ball option with Maddison.

April Ross continues to get served more and more while her partner, Alix Klineman, is getting served less and less. She’s stepping up to meet the challenge by getting more kills, although her hitting percentage is flat and was lower this season than last. She’s recently made more errors, but that stat is improving. Her aces trend is also declining from a peak of around 3 aces per match. She’s won 3 AVP titles with Alix this year, which shows you that stats aren’t everything. Look for her to continue creating opportunities on defense by making over 10 digs per match. 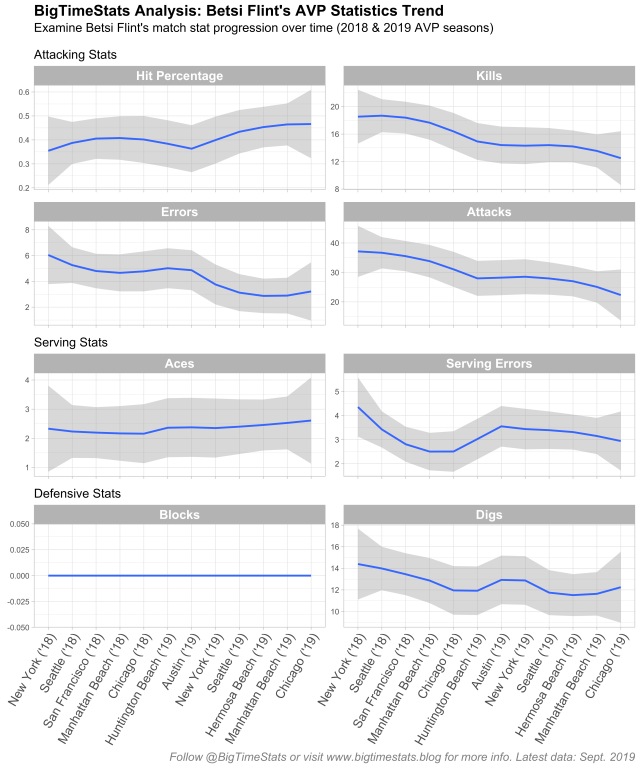 Betsi Flint has been improving greatly over the past 2 years. Even though her kills and attacks are going down, her hitting percentage is increasing as she has reduced her errors around 22% from last year. She’s also defending well with around 12 digs per match. She has no blocks as she relies on Emily Day to get around 2.5 blocks per match, but even Emily gets around 3 digs up per match as a blocker. This is probably when she pulls back off of the block to defend. They’ve been in 3 AVP finals this year, winning 1. Look for them to remain scrappy on defense to make a run for the title in Hawaii.